Plateful of vegan, I am the kind of person who firmly believes “vegetable biryani” is an oxymoron, and tends to look surprised when people order vegetarian food in restaurants. So when I set out to explore Bangalore’s vegan restaurants, it is with a mix of scepticism and self-pity, and murmurs of “occupational hazard”. Just in case you are a little fuzzy about the details, vegans avoid eating any animal product, including milk and other dairy products, usually because of the cruelty to animals the production involves and the impact on the environment.

The city now has not one but two all-vegan restaurants, both in Koramangala in south Bangalore which is choc-a-bloc with dining options. The latest is the month-old Paradigm Shift which occupies the top floor of a four-storey building and is a lovely, airy space with beautiful old wooden furniture, lamps and an antique radio that unfortunately does not work. The young proprietor, Sowmya Reddy, says the restaurant is partially powered by solar energy and they use as many organic ingredients as possible, the long-term plan being to grow their own vegetables.Reddy has been vegan since childhood, when she watched a programme by Maneka Gandhi on Doordarshan. “I saw a goat being slaughtered and, I told my mother I didn’t want animals to suffer to satisfy my hunger,” says the 31-year-old. The lemongrass ice tea I ordered arrives in the meanwhile, with a lemongrass stem to stir the date syrup with. It’s refreshing and not very different from any other iced tea. The menu is mostly Thai, and there is also a range of smoothies, juices and salads. Considering the ingredients are mostly organic, the dishes are moderately priced, with even main courses in the region of Rs 200. In consultation with Reddy, I order Penang tofu, a mushroom and garlic fried rice and a Paradigm Shift special with the intriguing mock meat. I am the only customer for that weekday lunch, though Reddy says more people come during dinner and on weekends. The Penang tofu and rice arrive first and are quite good. The burnt garlic in the rice adds a subtle flavour, and the tofu has been fried and topped with a sweetish sauce, chopped peanuts and herbs. The mock meat too soon makes an appearance. The name is a bit of a stretch because it does not taste anything like meat (it’s made of soy) and the texture reminds me of a chewy potato wedge, but the dish, made with whole peppers, lemongrass, kafir leaves and vegetables stir fried in a tangy sauce, is good enough to make me take multiple helpings.The biggest test is dessert because I’ve ordered a chocolate truffle cake that has been made without eggs, milk or maida, which sounds incredible. But the dark squidgy slice turns out to be delicious, and I abandon my initial plan to sample just a sliver. Reddy says the cake has flaxseed oil instead of eggs as a binder, and whole wheat organic flour. They also have gluten-free cakes and cookies made with bajra, jowar and ragi, things I would previously have turned up my nose at.“Carrots, The Healthy Kitchen”, the other 100 per cent vegan restaurant, is just a short walk away from Paradigm Shift. While both may be vegan, Carrots focuses equally on healthy food. Even the potato wedges are baked and later drizzled with a little olive oil, says a bubbly Susmitha Subbaraju, who has the enviable designation of “countess of cuisine and jollification”. Carrots was launched nearly 14 months ago by former Infoscion Krishna Shastry, who became vegan 13 years ago when he had not even heard of the term. Carrots also hosts film screenings, talks and regular vegan cooking classes because Shastry says he is keen on making the space more than just a restaurant.The menu here offers a wider variety and serves Indian and continental, with a buffet during lunch, thalis and pizzas, pastas and bakes, as well as juices and smoothies.

While the Indian dishes look promising, I opt for a carrot coconut soup, made with coconut milk and a moussaka. I cannot detect the flavours of carrot or coconut milk in the creamy soup but it is warm and comforting. The moussaka, however, more than makes up for it and is excellent. Baked with zucchini, capsicum and aubergine that has been grilled perfectly, it is topped with a divine peanut-based sauce instead of the parmesan the non-vegan moussaka would have. I was not very hungry when I reached here but there is no difficulty in polishing off something like this. For dessert, I order a mango ice-cream which the waiter assures me is so delicious he wouldn’t mind having one himself. And he is right. Those of you who have tried Naturals ice-cream would find a certain similarity in the bowl of pale yellow, cold scoop of heaven, which vanishes all too quickly. The three-course meal comes to a reasonable Rs 430.While it is still unlikely that I am going to turn vegan soon, the food at both restaurants is good enough to make me return. And hey, I never thought the day would come when I would rave about vegan food, so perhaps one should never say never.DELHI’S HEALTHY BELLYTHE OLIVE TREECatering service for organic fareAlternative healthcare specialist Priya Aggarwal cooks comfort food with mostly organic ingredients sourced from Namdhari, Godrej’s Nature Basket and Lajpat Bhawan. She offers a variety of fresh, homemade and healthy food for cuisines such as Indian, Italian, Pan-Asian and Mediterranean. She also customises a completely organic and low-fat menu on request. Her Rajasthani matter ke paranthe with alu pethe ki subzi are a treat. Catering for gatherings of 20-100 people, The Olive Tree also home delivers.

Price: Starting from Rs 750 per plate for a fully organic meal

For people beset with gluten allergies, Café Amaltas came up as a lifesaver about a year ago. What started as a weekly Sunday brunch at Vasant Kunj has now moved to the Yoga Café in Shahpurjat as a monthly event offering gluten-free cuisine ranging from Kashmiri, South Indian, coastal to Chinese and Italian. Yoga Café’s menu changes every day and is posted it on its Facebook page. Its meal-in-a-box is available every afternoon with appetising items such as triple grain nachos with a Mexican dip and dairy free chocolate cake. 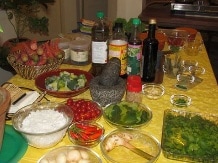 Lactose-sensitive and craving to have malai kofta without the malai? Meenu Nageshwaran, who decided to go vegan a couple of years ago, is the person to turn to. Her dairy-free khaosuey, cheeses and halwas have even made it to national TV. She cooks fresh vegan-friendly products such as unsweetened almond and cashew milk on pre-order (minimum 48 hours notice), creamy peanut butter and peanut and brown rice yoghurt